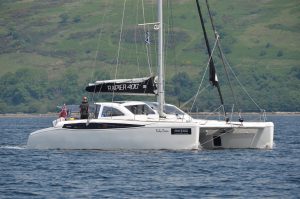 In its 42 year history the iconic Three Peaks Yacht Race has seen many changes, including the introduction of cycling, route changes and the application of handicaps for the sailing legs.  This year the latest change will see the clock turned back 20 years as multihulls return to the race for the first time since 1998.

In the early years of the race the entry rules were open and inevitably the multihulls dominated the racing and the monohulls struggled to be competitive. Up to 1993 the race was first across the line with all entries competing on equal terms, and from 1981 to 1993 catamarans and trimarans always topped the results.

Some of the great names of the race like ‘Queen Anne’s Battery’ (Formula 40 Catamaran), Severalles Challenge and the F27 Trimaran ‘Burtonwood Merseybeat’ were multiple winners.

From 1994 to 1998 two parallel races were run, and the last multihull winner was Pwllheli Partnership (an F31 R Catamaran) skippered by Richard Tudor, which set the scarcely believable record time of 2 Days 3 Hours and 4 minutes. (That’s the time for 389 miles of difficult coastal sailing and 74 miles of running to the summits of Snowdon, Scafell Pike and Ben Nevis.)

In a way the ever increasing speed was the undoing of the multihulls and in 1999 the race committee decided it was too difficult to manage a race for both multi’s and the mono’s.  The race was closed to mulithulls from 1999 onwards … but this year they are back!

The race did open entries to multihulls last year but after a two decade gap it took a while for word to spread and it wasn’t until this year that the 3 entries required to make a race for multihulls came in.

They will be in a separate category, so this year there will be two race winners, and MOCRA handicaps will apply to decide the result.  However, the runners on the three entries will be competing with all the other runners for the various running cups and titles, and the prestigious Tilman Cup is open to both multihulls and monohulls. This requires 4 of the crew of 5 to reach a summit and the winners will be first over the line having achieved that.

The three trailblazing entries are;

‘Don’t Look Down’, an Iroquois Mk2 Catamaran skippered by Dave Parker with runners Texa Sim and Roddy Sandeman. They are based in Scotland so will be sailing homewards!

‘The Peaky Blinders’, are sailing a Broadblue Rapier 400 Catamaran, skipped by Chris Ross who says up to now he’s been “a cruiser not a racer and is expecting a baptism of fire.”  However he has plenty of race experience on board as the rest of the crew have competed in the race before.

‘Wandering Glider’ is a Dragonfly 920 Trimaran and is skippered by David Thorneloe, who is the oldest of the year’s competitors at age 78. They are new to the race but have a strong mix of sailing and running experience in the crew including competing in the Scottish Islands Peaks Race.

The return of the multihulls this year will bring a new dimension to the competition as well as taking the race back to its roots, and hopefully the new multihull 3 Peaks Race will go from strength to strength.

About The Three Peaks Yacht Race

The race starts from Barmouth at 19.30 on Saturday June 15th and teams will race up the west coast, stopping at Caernarfon, Whitehaven in Cumbria and at Corpach on the outskirts of Fort William. The race covers 389 miles of difficult coastal sailing, including the passage of the Menai Strait and the many tidal challenges of the inner Hebridean Islands.

Each yacht has a team of 5, usually 3 sailors and 2 runners, and the race is non-stop, so teams are competing day and night, at sea and on the mountains. It is a test of endurance, navigation, tactics and team work.

The runners disembark at each port to race to the summits of the highest peaks in Wales, England and Scotland.  On Snowdon they complete a 24 mile circuit of the mountain, on the Scafell Pike route they cycle 40 miles and run 12.5 miles, and finally they scale Ben Nevis, the highest peak in the UK at 4413’, running a final 18 miles before getting back to their boat on the finish line.

During the race there will be daily reports and photos and you can follow the progress of all the teams on live satellite tracking; see https://www.threepeaksyachtrace.co.uk/2019-live-coverage

They are free for publication only with articles on the race and correct accreditation.  (See terms on Flickr.)

For more information on the race see www.threepeaksyachtrace.co.uk or contact the press officer by email on email hidden; JavaScript is required